Restaurants, beauty salons, doctors offices, and plumbers all know the importance of a great Yelp review. While there are no Yelp reviews for missionaries, this blog post sort of does the same thing. Pastor Joplin from The Well Worship Center, in Derby Kansas, is what you might call a return customer. At the time we spoke, he was taking part in his 5th team trip to Honduras. 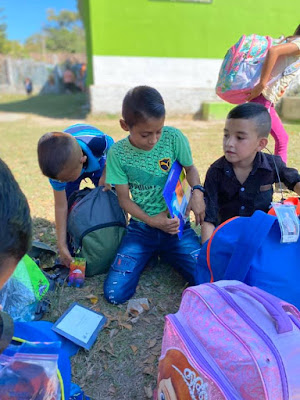 Pastor Joplin arrives with teams in February and during the summer. The February trip is scheduled to pass out backpacks full of school supplies in time for the start of the Honduran school year. This team distributes the backpacks their church has sent down in the shipping container, and also helps with the distribution of other backpacks. In the summer, a larger team from The Well returns, to present VBS programs.

When asked what attracts him to Sowers4Pastors, Pastor Joplin said, “From an American point of view, they are a ministry we can trust that they are doing what they say they are doing. Next, I believe in the work they are doing. The sponsorship program is something we have been interested in and continue to be interested in. The third reason is probably the most important. The ministry is still growing, not just maintaining. Our involvement is helping Sowers4Pastors grow and reach more people.”

The Well has taken on the responsibility of sponsoring all of the children numbered between 1000 and 3999, in the Quelecasque program - around 150 children. The first Quelacasque church they partnered with has gone from averaging 150 people on an average Sunday, to 250 people. The folks at The Well took an offering to help the Quelacasque church expand its building. There was no room on the church's land, for building out, so they will be building up. A second story will allow for six additional Sunday school classrooms and a larger sanctuary. Pastor Joplin said that the child sponsorship program is primarily the driving force behind the growth in Quelecasque. Work on the expansion is scheduled to begin next week and it should be completed by the time the next team from The Well arrives in July.

For those seeing this post by email, you can view the video at this link:
The Well Worship Center 2020 Backpack Distribution Team

Pastor Joplin described Sowers4Pastors as unique and different from most missionary ministries the church has worked with. “The Sowers family is deeply involved, hardworking, and they are truly leading this ministry. A lot of missionaries seem to see their primary activity as merely gathering support and trying to get other people to do stuff. The Sowerses lead the way. Their ministry will continue no matter who gets involved because they are here for the long haul. They work from sunup to sundown and say, ‘If you want to come alongside us, we will show you how you can help.’ They aren’t just raising funds from other countries. They are invested in Honduras and they are willing to let others come alongside them.”

That review is better than five stars on Yelp, any day of week!