A Little of This and a Smidgen of That


Have you ever tried to pull together a dinner from a hodge-podge of leftover items in your refrigerator? When my sister’s kids were growing up, she used to declare it was “cafeteria night” whenever she served a meal of random things that didn’t necessarily go together. This is sort of a cafeteria blog post. Each morsel is tasty, though no single ingredient contains enough meat for its own post. 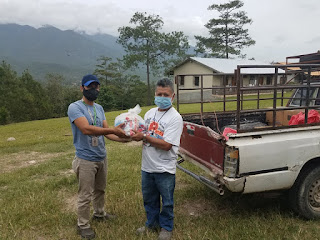 The first container full of food to ship to Sowers4Pastors since lockdown began is now in Honduras, and the food is on its way to Gracias. Although they have been able to stretch the 800,000 meals they had on hand, by purchasing more than 10,000 pounds of food locally, they have been distributing a lot more food than usual and supplies are running low. The new supply of food is expected to arrive before they run completely out of food!

The Sowers4Pastors part of the church construction project in Quelecasque is nearing completion. Normally, they put on the roof only, but for this project they put on an entire second floor as well. They're now at the point where the roof is going on and the lighting is going in. While the project took much longer than planned (due to Covid), the timing is still good since large groups are still restricted from congregating. The church, as their skin-in-the-game, will be handling the rest of the construction - things like painting and installing ceramic tile. 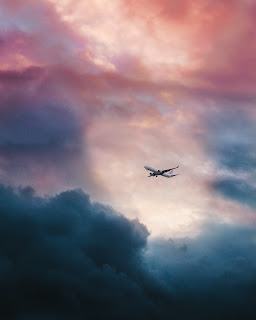 Allen has decided to go to the U.S. earlier than expected. Normally, he flies in at the end of August for the backpack trip. This year, he purchased tickets for August 11. He will be going directly to Maryland to help with food packing. He will also be meeting with some of the churches involved with Sowers4Pastors.

Part of the reason for the earlier travel date is that getting a flight out of Honduras can still be difficult. In case it takes multiple tries to get a flight, he and Russell will each be flying out of Tegucigalpa instead of San Pedro Sula. This is because Rachel lives in Tegucigalpa, and they’ll have a place to crash if it takes a few days to catch a flight. Russell will not be leaving at the same time as Allen, but his trip has also been bumped up by about a week.

If you are anywhere near the planned route along which backpacks will be collected, it is still not too late to get your location added to the trip map. The newest news is that the southern leg of the trip will go all the way to Texas! While backpacks filled with school supplies are the top priority, Sowers4Pastors also accepts gently used clothing items. The maps (to which additional stops can still be added) are shown below.

A mother/daughter team from Maryland has the unique ministry of cleaning second-hand dolls and restoring them. The beautiful dolls are given out to the non-sponsored girls that receive backpacks. This helps Sowers4Pastors keep their promise to provide each child with a toy. If you have the opportunity to swing by your local thrift stores, this dynamic duo would love it if you could pick up some baby dolls, Barbies, and other types of dolls for them to restore. If thrift stores are still closed in your area, you can even look through your kids’ old toys for dolls to donate. Ask your friends and neighbors to join in on the quest. Clothing is welcome, but naked dolls will not be turned away! 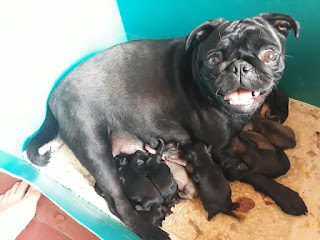 Rachel and Brandy bought a pug dog. While the dog generally functions as Nathan's pet, it was also purchased for the purpose of breeding, since pugs are highly valued as pets in the city. Pepper has just given birth to her first litter. Pugs normally have 4-5 pups per litter. This little mother delivered 10 puppies! This is a huge financial blessing for Rachel and Brandy’s ministry. And it’s a whole lot of fun for Nathan!

Ben’s school has made a commitment to finish out the school year for those students still participating online. Normally, the Honduran school year ends in November and students have December and January off. This year, they are planning to continue straight through until they’ve finished the work. This is fabulous news because the family wasn't sure if Ben would be able to count this as a full year of learning.

The bilingual school attended by RJ and by Kim Hall’s children has announced that it will start on schedule (this school runs on the US schedule). At least the first few months will be 100% online learning. RJ will be learning from his computer and Kim has decided to take this opportunity to homeschool her children for the time being.

Now that Allen has completed his two weeks of social distancing and is back in the house with Trish, he is working his way through a honey-do list. Trish is delighted to finally be getting curtains and pictures hung. Since their walls are cinderblock covered with stucco, this is a task best left for someone who knows his way around a toolbox.