Lots of teams visit Honduras to work with Sowers4Pastors. Each one is a welcomed blessing, but one team arrives with a different focus. They call themselves Gringos for Sowers and they make it their mission to bless the Sowers family. Their annual visit was last week. It was highly anticipated and greatly appreciated, as you might expect. 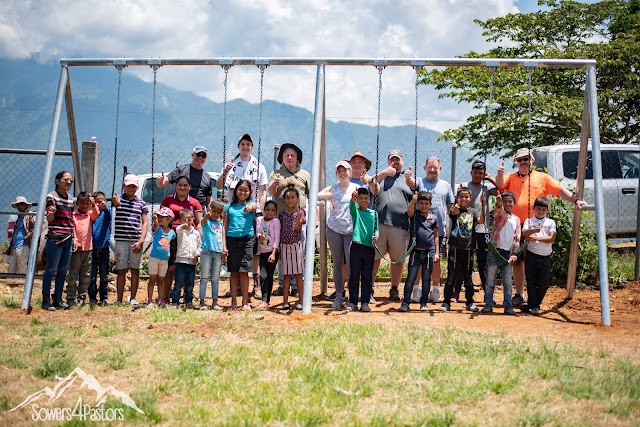 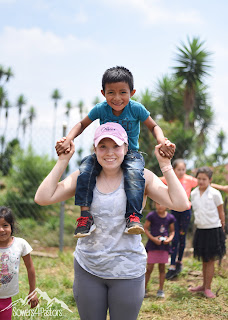 The team is generally made up of people from Lighthouse Church, but it isn’t an official Lighthouse team. They also do a project for the ministry. This year, they started off by putting up two playgrounds at two of the schools in the Crucitas area, which is Lighthouse’s sister church program. The work began before they even arrived since they also raised the money needed to purchase the playground equipment. Then, under the guidance of their team leader, Rob, they turned their focus to the Sowers family. (Check out this cool video by the very awesome Quito, which shows some pretty neat drone shots of one of the playground's locations: here.)

In past years, the team has done things like helping out with electrical work and painting. This year, one of their projects was especially appreciated by Trish.

When Allen and Trish first moved to Honduras from the States, they purchased a shipping container to use for storage. Since they were coming down to be construction missionaries, they filled the container with a lot of tools, construction supplies, and stuff for their family. The container was moved to the island of Guanaja, where the family lived for five years. For those five years, it sat on the sand and oxidized from the salt water. Its time on the beach did nothing to enhance its beauty!

When the family moved to Gracias, the container joined them. When they bought their current property, the container came along to serve as lockable storage. The container was old and used when they bought it in the first place. Trish, who is known for finding the best in all things, gave her official statement about the container. She said, “The nicest thing I can say is that it’s an eyesore.” (Which should not be confused with saying it’s a sight for sore eyes!)

The container was plopped down in the middle of the property, providing Trish with a less-than-picturesque view. It was about 25-feet from Allen and Trish’s house. When you drove onto the property, it was the first thing you saw. Trish’s adjectives of choice to describe the container were “rusted” and “nasty.” Kirstin liked to say it made the farm look like a redneck's playground crossed with a junk yard.... not that the Sowers aren't basically rednecks themselves, but the woman folk might not appreciate that the homestead might resemble that description. 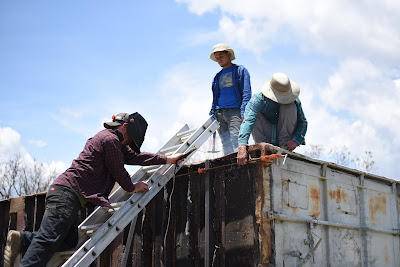 During their recent visit, Gringos for Sowers did something about it. They moved it! It is still rusted (though slightly less nasty), but it has been moved! One might get the feeling that Trish doesn’t really care what it looks like as long as she doesn’t have to look at it. 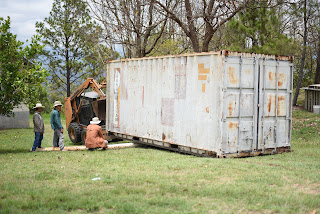 The team unloaded the contents of the container. And with the help of Russell and his crew, they turned it on its side. Then the team welded new floor beams in place.  Allen said, “The rest was in good shape, but the floor had the most corrosion from sitting on the beach.” He may have said more, but it was difficult to hear over Trish’s hysterical laughter when he said the rest was in good shape. 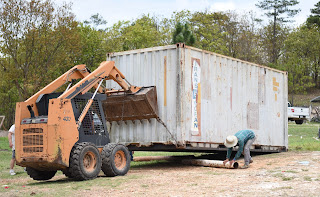 Trish explained that the container became a sort of hot spot for junk. If you needed to store a coil of cable, you might just set it beside the container. Once the team finished repairs, they moved the container with the assistance of rollers and a skid loader. Now the whole area looks a lot less like a redneck playground crossed with a junk yard!

The team also did electrical wiring in the new house being built on the property. And they did work in the storage areas. Trish said, “It’s kind of nice to have a team that asks, ‘What can we do to make your life better?’” There’s no question that she means that!

Email ThisBlogThis!Share to TwitterShare to FacebookShare to Pinterest
Labels: Construction Updates, Someone else ministering to US, visiting team