This is one of those posts that asks the all-important question, “Hey, people at Sowers4Pastors, what are you doing right now?” As usual, the answer is, “A lot!” But let’s break it down into some specifics.

You’ve probably caught on to the fact that Allen is off in the States collecting backpacks. While he’s driving across the country filling a gigantic Penske truck with boxes of backpacks, the people back in Honduras are carrying on without him. But his absence, and the fact that team season is over, changes the rhythm of things.

As Trish said, “If we have a task that is big, but not urgent, this is the time of year when it gets done.”

Rachel and Brandy have been taking time to familiarize the new staff with people and places they’ll need to know. That means taking the newbies out to various sites. It’s not like they can put the locations into Google Maps and head out on their own. There is a bit of a learning curve! 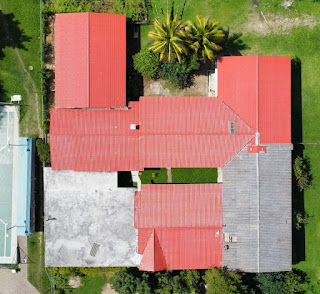 While this project isn’t something Sowers4Pastors is actively working on, they are keeping track of the progress of the new roof installation on the children’s home in Gracias after providing funds to the project. Quito goes out with a drone to take pictures so everyone can admire the new bright red roof as it goes on. 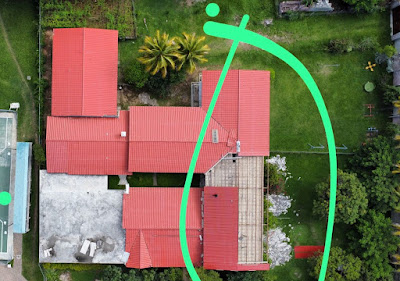 People often ask what is meant by the word “bodega” that frequently pops up in blog posts. No, it is not the same as the American usage. Allen and Trish aren’t running a small store like the bodegas in New York City. In Honduras, “bodega” is used to mean a large storage area, like a warehouse. Most commonly, bodegas are used to store coffee before it is sent out to sell. The S4P bodega is a place that sees a lot of action!

Every year, the bodega acts as a landing place for the contents of two shipping containers. It is, admittedly, not the tidiest of areas. There’s not a lot of turnaround time between the arrival and distribution of backpacks. So, people don’t have time to tidy and organize while working. As soon as backpacks are distributed, it’s time to begin making pastor gifts. And things get even messier! People sort through boxes of donations looking for just the right gifts for the size of the pastor's family and the ages of the family members. The distribution of pastor gifts can really drag on for a long time. As soon as this year’s gifts are completed, they will begin an intense tidying and cleaning spree on the bodega.

Do you remember when Trish and Allen moved from the giant bodega into an 800 square foot house? Much of their stuff ended up being stored in the bodega. When they moved to a larger house, Trish wanted to sort through those items. But their personal items were inaccessible! So, soon and very soon, Trish will be able to begin the mammoth task of moving and organizing household things.

Trish is also working with Quito to create some short video projects she has been wanting to do. The videos will explain how to do some basic things on the Sowers4Pastors website, such as how to update payment information. The videos will be helpful throughout the year because she will be able to direct people to the videos when they have some common questions. In addition to this, Quito and Trish are working on a series of videos explaining why the ministry does certain things in certain ways. For example: Why do they focus on constructing church roofs instead of entire buildings?

You might say that things have been hog wild lately. The farm purchased two hogs to raise. One of their workers takes on the animal-related tasks, such as feeding the dogs and caring for the hogs. He asked if he could put a hog in with theirs to raise - he received access to the food used for feeding the hogs in exchange for putting in extra hours working with the animals. His hog was recently butchered. Allen and Trish purchased some of the meat and Trish has been dealing with that like the pioneer woman she is! Allen and Trish’s hogs have both recently produced a litter and now there are many piglets. There have been many discussions about whether or not to continue raising pigs. It’s a lot of work, but the price of meat is high. So… As soon as the piglets are weaned, the original hogs will be butchered and Pioneer Trish will deal with more pork-related endeavors. 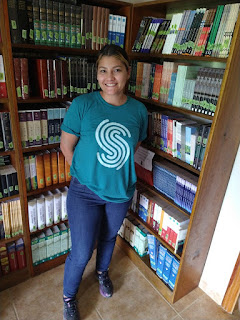 In other news, Ray, the fabulous office-worker, has moved on to a new job. It was not unexpected because, as Trish said, he was way overqualified for the position. He will be making more money in his new job. Everyone is happy for him because he is saving his money to hopefully study in the States. He will be missed, though! S4P interviewed new people for Ray’s previous position last week and hired a nice lady by the name of Nikki.

Aaaand… It’s official. Nathan loves kindergarten! After the isolation of COVID lockdown, he is thriving in his new learning environment, surrounded by other kids. Since Nathan is often described as the grandchild who is most like Allen in personality, this shouldn’t come as a surprise to anyone! He was born to be a people person.